Halo Bound is a hard-core, gritty, urban fantasy about a really messed up town and its really messed up citizens.  This is NOT a novel for the faint-of-heart, and I found it absolutely mesmerizing.  If you can handle the tough stuff, I can’t recommend it highly enough.

Publisher’s Description: The holy champion chosen to save the world is enslaved to a sadistic fallen angel and losing the battle for his sanity.

The guy chosen to save the holy champion is his binge-drinking redneck brother.

So, basically, the world is screwed.

Colt—a mentally unstable holy soldier with a rapidly deteriorating hold on reality. His last plan to rid the world of evil either failed horribly or went off without a hitch. With the constant torture and brainwashing, it’s getting hard to be sure of anything but the sick attachment he’s developing to his beautiful tormentor.

Tough—a smart-mouthed honky-tonk hero trying to drown his problems in music, women, and good times. He hasn’t spoken to Colt in five years—not since their disagreement over a nymphomaniac vampire turned into a drunken slugfest—but they’re still brothers. Tough knows he can’t leave Colt fighting for his life and his sanity alone. The question is whether Tough can fight off his personal demons long enough to save Colt from the literal ones.

Halo Bound is the first book in the Redneck Apocalypse series. It was originally published under the title How to Kill Yourself in a Small Town.

Nervous Nellie’s nervousness necessitates knowledge of the novel (in other words, SPOILERS!).

Okay, Nell.  We were going to read Halo Bound together, but after reading it, I can just imagine you’re hating me right now.  Not your kind of book.  How far did you get?

What got to you the most?

The slavery.  I hate slavery.  That was the first thing that smacked me in the face.  The next thing was the cult like feeling I felt when reading about the fallen angels.  I remember David Koresh and the Jonestown Massacre.  Cults make me nervous and reading about them in a story that is supposed to relax me just doesn’t work.

Yeah, I figured those things would bother you.  Halo Bound is certainly not a “happily-ever-after” kind of book.  The people in the book are messed up psychologically and emotionally.  What’s happening in the town is messed up.  I kinda think that’s what I like about it.  These are people in an extremely desperate situation just trying to make the best decisions they can with some very limited emotional resources.  Everyone one of them is dealing with trauma and misery and stunted emotional development.  And yet they are really trying to do the right things.

Good warning to those out there that like the HEA or the *dreamy sigh* kind of romantic type of story, huh?

Yep.  This is not one of those books.  But there is romance, and drama, and ass-kicking, and insanity, and all sorts of other good stuff!  But you’re not going to finish the book, are you?

Please don’t make me, mom.  It would really be hard for me to get through it and then since I have problems with the content, you won’t get a review that’s not tainted with my issues.

Oh, alright.  But, you have to do the dishes and clean up your room instead.  Meanwhile, I’m going to be reading Book 2!

Though I can see how Halo Bound might not be for everyone, I think it’s an incredibly good book.  I was kinda blown away by how good it was, since I got it free on Amazon.  And what do you think about that cover art?  I think it’s gorgeous.

That being said, I’m having a really hard time figuring out what to say in this review.  I’ve made several attempts now, and I either end up trying to retell the whole story, or I end up talking about all the emotional baggage carried by the characters and how they work so hard to make things right with the limited resources they have.  That’s not really the point I want to make.

As Nell has pointed out, it’s not a feel-good story.  There are no happily-ever-afters.  Crappy shit happens to the characters.  Some of them are stuck with their fate whether they want it or not.  The ending isn’t a cliff-hanger, but you know there is more, so there’s a “to-be-continued” feel.

There is a complex set of characters and relationships in this story, which is part of why it’s so good.  I did find myself jotting some quick notes about each character and their relationship to the others.  I don’t usually take notes for a novel unless I have a specific purpose, but I wanted to be sure I was clear about each character; I had a feeling it would matter.  Also, since the story is told from the first-person perspective of different characters, the details about the town, its history, and its residents unfold a bit at a time in the beginning.  After about 20 pages or so in, I went back and read it again from the beginning to be sure I had understood everything.  I think those two things really paid off, helping me get a clearer picture in my head about everything that was happening.

Halo Bound is what I consider good urban fantasy; but I think it’s also fairly unique in the genre.  It’s not a detective story, not a mystery, not adventure really.  Not a “monster-of-the-week.”  More of a “reluctant hero (or anti-hero) can’t escape his fate” kind of story.  And fate sucks.

So again, I say, READ IT.  This book is going to make my short list for best and most unique read for this year. 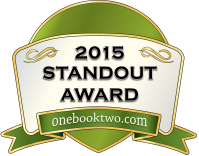 Book Two, Hell Bent, and a prequel novella, “Shannon in the Lion’s Den,” are available on Amazon.

Posted on June 9, 2015, in All Reviews, Standout Award and tagged eden Hudson. Bookmark the permalink. 4 Comments.