As part of the Iron Druid read-along, Kat is adding her review of Hounded to Percy’s 2015 review.

A two-thousand-year-old druid’s past finally catches up to him as he must face off against an old enemy.  Fortunately, he has friends. 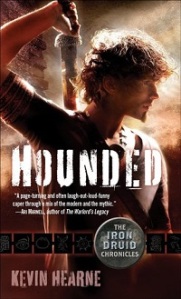 Publisher’s Description: Atticus O’Sullivan, last of the Druids, lives peacefully in Arizona, running an occult bookshop and shape-shifting in his spare time to hunt with his Irish wolfhound. His neighbors and customers think that this handsome, tattooed Irish dude is about twenty-one years old—when in actuality, he’s twenty-one centuries old. Not to mention: He draws his power from the earth, possesses a sharp wit, and wields an even sharper magical sword known as Fragarach, the Answerer.

Unfortunately, a very angry Celtic god wants that sword, and he’s hounded Atticus for centuries. Now the determined deity has tracked him down, and Atticus will need all his power—plus the help of a seductive goddess of death, his vampire and werewolf team of attorneys, a sexy bartender possessed by a Hindu witch, and some good old-fashioned luck of the Irish—to kick some Celtic arse and deliver himself from evil.

My second foray into the Iron Druid Chronicles was as fun and entertaining as the first time. In Hounded, readers are introduced to Atticus O’Sullivan – an ancient and solo Druid with lots of magical secrets, an Irish wolfhound best friend, and plenty of snark to go around.

I loved this story all around. Atticus is adorably fluffy at times, pervy, romantic, and intense as all hell when it comes to defending his magic and birthright. He’s had over 2,000 years of practice to get it all right but he’s still figuring it out and making stuff up as he goes.

The magic system in this one is new for me. Atticus isn’t all powerful. That being said, he’s still pretty powerful and attuned to the Earth in more intimate ways than some rocks. He’s also got friends in high places – including a team of vamp/were lawyers, a witch-possessed woman, some earth-formed golems who like to eat fairies, and Oberon, his best friend and hound. Not to mention, he’s got some feisty goddesses to deal with, some who are allies, others who may turn out to be a bit more complicated than that.

Atticus has spent most of his life hiding from his rival, Aengus Ohm, but when the old god sends some pretty crazy assassins to take him out and kills off pieces of land that are sacred to Atticus, it brings the druid out in the open for a full-scale battle against witches, werewolves, demons, and fae. The action and adventure in this is pretty intense as Atticus has to be one step ahead of his old enemy.

The one drawback to this story for me was only one thing. And before I say what, I will point out that is is VERY clear that Hearne knows his history, mythology, and religion extremely well. However, the first couple of chapters and some later on really drag for me while Atticus is explaining certain magic systems and historical memories. It gets better as the story progresses, but for me, the first chapter took a while to get through, especially. I feel like there was a lot of info-dumping that could have been more spread out. But I’m no editor, so maybe there was no other way for him to utilize all that information.

Either way, it was a great story. Now I’m on to book two!

What I didn’t like: Very little. If I didn’t like anything, it was a lack of pictures of some of the tattoos. I also think that if I hadn’t had it in ebook format, I would have referred to the pronunciation guide more but it wasn’t easy with the ebook.

What I liked: I didn’t see Atticus as a surfer dude. In terms of writing, while that description may have been used, and for his age, he only looks in his early twenties, there is no attempt at an accent or mannerisms for that stereotype. I liked that this was a book about an experienced person, not someone still learning the ropes. As a character, Atticus knows who he is and what he wants to do. There is no angst or learning about the power; instead, this is about how you apply power to meet your goals. That was very refreshing. I like that he has a business that fits him, rare books, but has investments so that money isn’t a concern. For me, this is another example of showing that he’s older and experienced and doesn’t have to worry the trivial things.

I enjoyed the mythology set up in here. I liked reading about the old gods and their ways and how they interact. I liked that it’s kept to what is needed so more can be revealed in later books.

I really enjoyed his friends. Oberon, his dog, is awesome and fun and reminds me of a dog while being so much more. I like that he has supernatural friends who are willing to help him. All of this really added to the story and made me curious to learn more about Atticus and his world.

The bottom line for me is that this was a very fun, good read. I quickly enjoyed the writing, the characters, and the world. I look forward to the next book!

Ivana has reviewed the audio versions of three books later in this series:

Besides the normal urban fantasy types, I think anyone who likes the White Wolf RPG Scion would be interested in this book. A lot of themes, although certainly not exactly the same, are here and it would be a good example of how to do that style of game.

I'll get to it
View all posts by Percy Procrastinator »