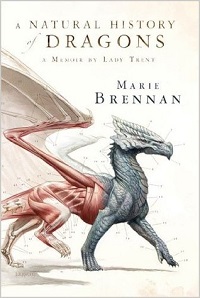 Publisher’s Description: All the world, from Scirland to the farthest reaches of Eriga, know Isabella, Lady Trent, to be the world’s preeminent dragon naturalist. She is the remarkable woman who brought the study of dragons out of the misty shadows of myth and misunderstanding into the clear light of modern science. But before she became the illustrious figure we know today, there was a bookish young woman whose passion for learning, natural history, and, yes, dragons defied the stifling conventions of her day.

Here at last, in her own words, is the true story of a pioneering spirit who risked her reputation, her prospects, and her fragile flesh and bone to satisfy her scientific curiosity; of how she sought true love and happiness despite her lamentable eccentricities; and of her thrilling expedition to the perilous mountains of Vystrana, where she made the first of many historic discoveries that would change the world forever.

Publisher’s Description: Attentive readers of Lady Trent’s earlier memoir, A Natural History of Dragons, are already familiar with how a bookish and determined young woman named Isabella first set out on the historic course that would one day lead her to becoming the world’s premier dragon naturalist. Now, in this remarkably candid second volume, Lady Trent looks back at the next stage of her illustrious (and occasionally scandalous) career.

Three years after her fateful journeys through the forbidding mountains of Vystrana, Mrs. Camherst defies family and convention to embark on an expedition to the war-torn continent of Eriga, home of such exotic draconian species as the grass-dwelling snakes of the savannah, arboreal tree snakes, and, most elusive of all, the legendary swamp-wyrms of the tropics.

The expedition is not an easy one. Accompanied by both an old associate and a runaway heiress, Isabella must brave oppressive heat, merciless fevers, palace intrigues, gossip, and other hazards in order to satisfy her boundless fascination with all things draconian, even if it means venturing deep into the forbidden jungle known as the Green Hell . . . where her courage, resourcefulness, and scientific curiosity will be tested as never before.

Pssst, do you enjoy books about dragons? I thoroughly enjoyed reading the first two books of the series Memoir by Lady Trent. The author chose to write the story as a memoir so it was good fun to have the asides from the main character of what she learned or would do differently in hindsight. I also enjoyed the time period in which this series is set because it lends to the adventure of Lady Trent stepping out of her gender role of Victorian England’s expectations.

The only oddity was the made up names of countries and their peoples. I found that I didn’t pay that much attention to the fact that the story took place in Scirland rather than England or the made up new names for the months of the year. It wasn’t really necessary to create that in order to lend the air of something not quite of our actual history.

I did enjoy the natural history aspect of discovering more about dragons, creating an entire taxonomy and having them just be a part of the regular fauna of this made up world.

Two quotes from the books really struck me. From the first book:

“I often miss Scirland during my travels; there is a great deal to be said for the place where one need not think, all the time, about the right thing to do or say, but simply behave according to well-worn habit…”

I have traveled to foreign countries and have never been quite able to put into words why it’s difficult to transition. This hit the nail on the head.

Towards the end of the 2nd book:

“So it has been, again and again throughout my life, as I form connections with people and then lose them to time and distance. I mourn those losses, even when I know my erstwhile friends are safe and happy among their own kin.

But the only way for me to avoid such losses would be to stay home, to never journey beyond the range of visitation. As my life will attest, that is not a measure I am willing to take; nor would I forgo the pleasures of me transient friendships if I could.”

This to me captures the essence of why people go on adventures and travel beyond their own borders to experience the wider world. I am very pleased that Lady Trent has become a role model of sorts for me, even though I quite likely won’t ever get to see a dragon!

…you might try the Temeraire Series by Naomi Novik, Gorillas in the Mist by Dian Fossey (non-fiction), or the Jade Del Cameron series by Suzanne Arruda.

I am a former Independent bookstore owner that created a 30 books in 30 minutes presentation for book clubs, libraries and avid reader groups. I specialize in short reviews that focus on plot, theme and discussion topics. I primarily read mystery/thriller, who-done-its and sci-fi/fantasy. I love stories in any format and will listen to an audio book as quickly as I would read a paper or digital version. I prefer books that make you think, don't have a predictable ending and tend to have some aspect that is outside the current norm. I tend to enjoy series once I am hooked on the main characters and the world and am very loyal. Some of the books I've enjoyed in the past are: Maisie Dobbs by Jacqueline Winspear, The Dragon Riders of Pern by Anne & Todd McCaffrey and The Sherlockian Graham Moore. I will also read ANYTHING by Stephen King. As a matter of fact, I wrote a graduate level paper on the leadership styles in The Stand. I will accept review requests.
View all posts by Agent Annie »

Posted on April 4, 2016, in All Reviews and tagged Marie Brennan. Bookmark the permalink. 4 Comments.