The Brimstone Deception by Lisa Shearin

SPI Agents never catch a break.  Action and adventure to keep you occupied, romance to make you swoon. 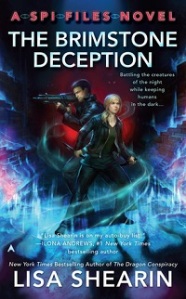 Publisher’s Description: It’s called Brimstone. And after the first few hits, you’ll see every supernatural beast sharing the sidewalk, train, or office with you. After that, you’ll start seeing the really scary stuff.

I’m Makenna Fraser, seer for the SPI. And the collateral damage caused by Brimstone is something I’d like to unsee: dead drug dealers missing their hearts—and souls. Because your local pusher doesn’t stand a chance against the new cartel muscling its way into New York. And since the drug can only be produced with magic and molten brimstone fresh from Hell, that means a rift to the underworld is open somewhere in the city.

And when—not if—the cartel loses control of it, well…

It’s going to be Hell on earth.

This is accurately labeled as a combination Janet Evanovich‘s Stephanie Plum/Men in Black story.  It’s an urban fantasy with a little romance goin’ on. There isn’t a cliffhanger, but there is a book #4 (Yay!!).    There are monsters and killing of said monsters.  It’s a fun series that has characters that appreciate humor. The series probably should be read in order, but if push comes to shove, it could be understood if started out of order.

Come for Rake Danescu, stay for MacKenna Fraser, Ian Bryne and the rest of the cast.  Rake is a hunky goblin that is sin on a stick.  He’s after MacKenna, though his motivations are suspect.  The sexual tension between the two is swoon worthy though I love how MacKenna isn’t stupid and remains vigilant regarding sussing out Rake’s intentions.  He is a goblin with a reputation – she is smart to be cautious.  MacKenna has a great sense of humor and she is also quite aware of her limitations.  That’s refreshing to me.

The story picks up immediately after Book #2.  SPI agents don’t get a break when it comes to the supernatural. Of course, the agents have to save the world again, but that is par for the course.  I like the fact that this series doesn’t depend on just one kind of supernatural to be the villain and the stories are not anything alike.  Each book is a new challenge for the agents with plenty of action thrown in.

Another fun adventure for Mac and Ian.  New York’s drug dealers are being killed off while a new drug, created with Hell’s Brimstone, is flooding the city.  Ian and Mac have to track down the killer and the maker of Brimstone before anyone else dies.

Rake is, of course, a suspect.  But is he part of the plot, or is he just being set up?  I love how Rake gets “real” in this story.  We get to see beyond the playboy facade to the person underneath.

Again, Johanna Parker does a great job of narrating the story.  She is such a good pick for these stories.  I can’t wait until the next one.

If you haven’t read them yet, the Sookie Stackhouse novels by Charlaine Harris would be good for fans of Makenna in either book or audio form. You might also like the Paranormal Scene Investigation series by Laura Anne Gilman or the InCryptid series by Seanan McGuire. Of course, there is also the Raine Benares series by Lisa Shearin, wherein more goblins dwell.

Posted on April 25, 2016, in All Reviews and tagged Lisa Shearin. Bookmark the permalink. 7 Comments.