Curse on the Land by Faith Hunter

Nell Ingram—new PsyLed agent, earth witch (kinda), and former member of an end-of-days Christian cult—helps uncover the cause of mysterious human and animal behavior and death connected in some way to the weird black mold covering the landscape. As usual, she’s in over her head, but manages to do her job, even if she has to break a few of the rules…

I received an ARC of this book from the author/publisher. All opinions are my own. 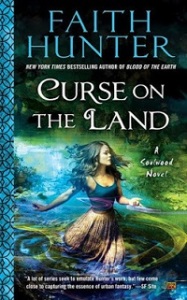 Publisher’s Description: Set in the same world as Faith Hunter’s New York Times bestselling Jane Yellowrock novels, the second Soulwood novel tells the story of a woman whose power comes from deep within the earth…

Before Nell Ingram met skinwalker Jane Yellowrock, she had no one to rely on, finding strength only in in her arcane connection to the dark woods around her. But now she has friends in the newly-formed PsyLED team to keep her grounded—even if being part of the agency responsible for policing paranormals presents dangers of its own…

After training at the PsyLED academy, Nell returns home to her woods to find the land feeling sick and restless. And that sickness is spreading. With the help of her team, under the leadership of agent Rick LaFleur, Nell tries to determine the cause. But nothing can prepare them for the evil that awaits: an entity that feeds on death itself. And it wants more…

I’m starting to believe Faith Hunter can do no wrong.  Well, “write” no wrong, at least.  Curse on the Land is another fabulous urban fantasy novel featuring Nell Ingram, Rick LeFleur, and the PsyLed team.

In this installment, the team is investigating some mysterious deaths that seem to be connected to sentient powers deep within the earth. Several times in the story, Nell, as the narrator, is describing the experience of communing with the earth. Often times, she tells her team that the experience can’t be described in words—except that, since this is a book, this is exactly what she is doing for the reader. That made me grin.  Yet it couldn’t have been easy to find words to describe these experiences in a way that made sense to the reader, so kudos to Faith for that.

Some of the more interesting side stories in this book deal with Occam’s feeling about Nell and about Rick LaFleur’s magical handicap—his inability to turn into the werepanther he is at the full moon. Ooh, boy, will there be some fans excited about THAT plot line. I gotta wonder if Rick’s issues will be the focus of the next Soulwood book or if any of it will spill over into a future Jane Yellowrock book.

The ending—well, really the cause of the mystery Nell and her group are solving—is pretty complicated and I’m not quite sure I grasped it all the first time around.  But, that’s what the audiobooks are for!  I pick up different details from the audio than I do from the text, which makes the reread (re-listen?) value awesome.

If you liked the first book, Blood of the Earth, I’d certainly recommend picking up Curse on the Land.  There are no vampires in this installment, but there are certainly characters and story lines that relate back to the Jane Yellowrock series, and Jane fans are NOT going to want to miss this one. 😉

This is a urban fantasy, no sex, lots of blood, lots of magic, plenty of death (but no one we know) and a cameo from

Jane Yellowrock.  There is no cliffhanger and maybe a tiny hint of romance.  I listened to this book via audiobook.

Faith Hunter is one of my favorite authors.  Khristine Hvam is one of my favorite narrators.  Nell Ingram is now one of my favorite heroines.  It took finishing this book before I was totally sold on Nell.  I kept thinking that no one can be as good as Jane Yellowrock and while that is true, no one can now be as good as Nell Ingram.  Both women are strong in their own way and talented in different areas.  Nell is an incredible investigator and even though she does go “rodeo” as Ricky Bo calls it, she does know how to take one for the team.  She uses her upbringing to her advantage and my favorite parts of the story is when she reverts to church-speak to gain confidences of witnesses.

Yes, Ricky Bo is still in this series.  I know, I know.  Ricky Bo is Nell’s boss so where else would he be?  Well, Rick

plays more of a role than boss in this book.  I got to see more about the agony that his were-taint is causing him.  I nearly felt sorry for the man.  Nearly.  He still broke Jane’s heart, but now I know how much he’s really suffering and how scary and uncertain his existence really is.

Seriously, this was a really good book.  Khristine Hvam is a top shelf narrator and even though she does narrate the Jane Yellowrock, she modulates her voice enough to distinguish between Jane and Nell.  That, to me, is incredible talent.  If you like Jane Yellowrock, please give this series a shot.  I was skeptical at first, just because it featured Ricky Bo, but Nell outshines all the characters in the book and she’s brilliant.

…you might try the Jane Yellowrock series, of course; the Mercy Thompson series by Patricia Briggs, or the Shifter series by Rachel Vincent. 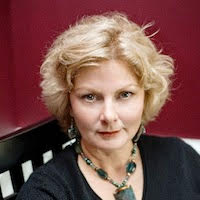 Under the pen name Gwen Hunter, she writes action-adventure, mysteries, and thrillers. As Faith and Gwen, she has 30+ books in print in 29 countries.

Hunter writes full-time, tries to keep house, and is a workaholic with a passion for travel, jewelry making, white-water kayaking, and writing. She and her husband love to RV, traveling with their rescued Pomeranians to whitewater rivers all over the Southeast.

I received an ARC of this book from the author/publisher. All opinions are my own.

Posted on October 28, 2016, in All Reviews and tagged Faith Hunter. Bookmark the permalink. 9 Comments.