The Voodoo Killings by Kristi Charish

WHOOP!  Now I know why Penguin Random House Canada was so excited about this book at BEA.  It’s AMAZING!  Both Nell and I are totally enthralled. Not only is this a fantastic urban fantasy, but it’s also a classic “whodunit!”

FTC Notice: This book was provided free in exchange for an honest review. This is no way impacts my opinion of the book or the content of my review. 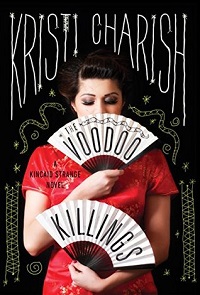 Publisher’s Description: For the first time since we launched Bitten by Kelley Armstrong, Random House Canada is thrilled to announce the debut of a new urban fantasy series. Kristi Charish’s The Voodoo Killings introduces Kincaid Strange, not your average voodoo practitioner…

For starters, she’s only 27. Then there’s the fact that she lives in rain-soaked Seattle, which is not exactly Haiti. And she’s broke. With raising zombies outlawed throughout the continental USA, Kincaid has to eke out a living running seances for university students with more money than brains who are desperate for guitar lessons with the ghost of a Seattle grunge rocker–who happens to be Kincaid’s on-again, off-again roommate.

Then a stray zombie turns up outside her neighbourhood bar: Cameron Wight, an up-and-coming visual artist with no recollection of how he died or who raised him. Not only is it dangerous for Kincaid to be caught with an unauthorized zombie, she soon realizes he’s tied to a spate of murders: someone is targeting the zombies and voodoo practitioners in Seattle’s infamous Underground City, a paranormal hub. When the police refuse to investigate, the City’s oldest and foremost zombie asks Kincaid to help. Raising ghosts and zombies is one thing, but finding a murderer? She’s broke, but she’s not stupid.

And then she becomes the target…As the saying goes, when it rains it pours, especially in Seattle.

Sometimes knowledge is not the worth the headache.

Murphy’s law: everytime you think you know something, the universe will prove you wrong.

This is an urban fantasy/mystery. No sex, no graphic violence but PLENTY of magic. The story completes without a cliffhanger; however, there is a lead into the next book and the next book cannot come too soon!

Necromancers. That’s what we call ’em. Kincaide Strange and her mentor are necromancers but they call themselves “practitioners.” There are laws that govern the use of that kind of magic and it has left Kincade out in the cold. She used to work for the police solving murders. She has been relegated to the rubbish bin by the new head police guy in town and her boyfriend (dirty, rotten scoundrel) because of her magic. Luckily, her best friend is a famous grunge rocker who happens to be allergic to responsibility—and corporeally challenged. Yep, he’s a ghost. Intrigued yet? Well, that’s not even the half of it!

I started this book on a Saturday and figured I’d read a couple of chapters just to get started. I was in the same place that afternoon after not putting the book down for anything less than a bathroom break. It was a page turner. The action, adventure, and characters were put together so well that it felt like I’d known these people for several books in a series when this is only the first. Having a ‘one sit wonder’ doesn’t happen with every author I read, but it seems like when Charish gets her groove on, she makes things happen. [Just reminding everyone of Owl and Captain (her other series).]

The mystery is good. Excellent, as a matter of fact. The author had me running down blind allies and taking wrong turns all throughout the book. Not once did I guess the real perpetrator. I was led through the pages of this book on a wild goose chase or two before it finished up with a bang. It was an amazing bang, too.

The characters are whole and entertaining. If I had to pick a favorite character, I would be hard pressed. They were all exceptional. They were developed, complex and totally captivating. They each had their own personality so much that I questioned the integrity of a couple of them. There are loose threads that are left dangling to be picked up in the next few books. I don’t know if there will be several books, but I’m hoping. This series is NOT to be missed.

To reiterate: To say I enjoyed this book would be a gross understatement. It left me riding high and excited to see what happens next. I can’t imagine where Kincade and Nate will take us next, but I’m ready. More than ready!

What drew me to this book: I’ve been a fan of Kristi Charish’s Adventures of Owl series since I came across it last year. I was pretty excited to hear she had started a new series, and that it was out in audio. Plus, check out the cover and description! I just had to find out how Charish could combine Seattle grunge rock, Haitian Voodoo, and a Japanese geisha.

Why I kept reading: This supernatural murder mystery blew me away! The world building is fantastic, reminding me of The Hollows series by Kim Harrison in the depth of thought put behind it. Magic is out in the open, regulated by the government and policed just like everything else. The development of the rules of magic and the impact of magic on the culture hits my world building sweet spot.

The characters are deep and well-developed.  Each one of them feels real and worthy of my attention. Much like Charish’s Owl, I occasionally wanted to smack Kincade upside the head (actually, several of them could use a good smack) as much as I was rooting for her.

The action and mystery were fantastic!  I had a horrible time putting the story aside to work or sleep, I was so engaged in finding out who did it. Seriously, I went to bed one night with 4 hours left in the audio. I couldn’t fall asleep until the book was done!

The narrator, Susannah Jones, is absolutely perfect!  I had not heard her prior to this book, but you can bet she’s going on my list of favorite narrators.

AND THE ENDING! That was the best “Oh, shit!” ending I’ve read in a long while! It’s going to make the wait for Book 2 a KILLER!

Why I recommend it: The Voodoo Killings is a masterful urban fantasy “whodunit.” It is one of the best, if not THE best, book I’ve read so far this year!  If you’re a fan of the genre, it’s going to knock your socks off.  And even if you’re not normally an urban fantasy reader, you have got to give this book a try.  It’s so exciting and so well written, you really don’t want to miss it!

FTC Notice: This book was provided free in exchange for an honest review. This is no way impacts my opinion of the book or the content of my review.

Posted on January 1, 2017, in All Reviews, Standout Award and tagged Kristi Charish. Bookmark the permalink. 4 Comments.