← Author Announcements and Book News 1/3/18
I Hate Fairyland Volume 1: Madly Ever After by Skottie Young →

The Twitches are back in the final book of the series. Can they become witches and follow in their family’s legacy? Or will Thantos prevent them from their initiation by throwing evil at them from all directions? 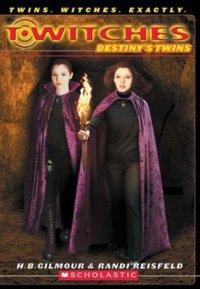 Publisher’s Description: In this gripping installment, Cam and Alex are on the brink of Initiation—until someone evil sets out to stop them from succeeding. Can the twins still become true witches?

It’s the moment they’ve been waiting for. Cam and Alex are about to be initiated. In just a month, the girls will be welcomed as full-fledged witches in a blowout bash on Coventry.

But first, they’ve got to prove themselves witch-worthy. The twins must complete a series of tough magick tests. And they’ve got an extra-credit exam: someone sketchy is out to stop them both from succeeding. It’s up to the twins to decide how to get rid of this creep. But they’d better choose wisely. Because nothing less than their destiny is at stake.

The Twitches are back in the final book of the series. Can they become witches and follow their family’s legacy? Or will Thantos prevent them from their initiation by throwing evil at them from all directions?

All bets are off for the twins as they spend their entire birthday month studying, training, and preparing for their Coventry Island initiation. This test will prove just how strong, brave, and kind they are against all witchy situations. But they’re also dealt wild cards in the fact that their malicious Uncle Thantos is plotting against them. He’s recruited Sersee and some of his other lackeys to tear Alex and Cam apart when they need each other most.

I don’t really have much to say about this book. I mean, happy ending, and lots of precious self-discovery and proud moments. However, it lacks in the build up. I just thought that there would be more to their initiation or more to the book itself perhaps? There was very little backlash from other villainous characters, like Sersee and the other Furies. Plus, you never really hear about the drama with Shane and what’s happened to him after he tried to kill Thantos.

Either way, I enjoyed this reread of the series.

You might try the Daughters of the Moon series by Lynne Ewing, the Sweep series by Cate Tiernan, and Witches’ Key To Terror by Silver RavenWolf.

I'm an urban fantasy and young-adult paranormal writer. I love to cook, rock out to music, and read as much as I can get my hands on. Always believe in your dreams and pursue them no matter what the cost. If you believe in it, it's worth every chance you take.
View all posts by Kat Mandu »

← Author Announcements and Book News 1/3/18
I Hate Fairyland Volume 1: Madly Ever After by Skottie Young →