The Shadow: Year One Omnibus 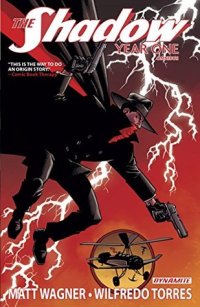 Publisher’s Description: The Shadow has enjoyed nearly a century of enduring popularity as the first and greatest hero from the golden age of pulp magazines. Here, for the first time, is unveiled the origin story of how the Master of Men returned to America following his many adventures abroad in the aftermath of World War I. How did Lamont Cranston launch his legendary crusade against crime, assemble his vast network of covert operatives, and meet his lover and companion, Margo Lane? A treat for longtime Shadow fans and a perfect introduction to the character for a whole new generation of readers. Who knows what evil lurks in the heart of men? The Shadow Knows!

Collects the complete ten-issue storyline (#1-10) from The Shadow: Year One, including a pin-up gallery of over 50 comic book covers (by top-tier artistic talent including Alex Ross, Matt Wagner, Chris Samnee, Wilfredo Torres, Howard Chaykin, and more), plus hand-drawn sketch covers.

I love the Shadow. I read many of the novels and comics as a kid. When it was rebooted in the late 80s as a comic series, I was there. Sadly, it didn’t last long, nor did another revival a few years after that one. I knew that Dynamite had started another series in 2011, but it was only twenty-four issues. They also put the Shadow in a series called Masks, pairing the Shadow with some of his contemporaries.

The Shadow: Year One is a compilation of a new series, again by Dynamite. I should probably step back and explain Year One.

A lot of comic book publishers are taking their known characters and doing a new look at them, called Year One. Most of the time, if you reboot or start a new Batman, Superman, X-Men, or other known series, the author will just jump into their story, assuming the reader knows how these heroes got started. Or if they do an origin, it’s usually a quick version of it.

Take Batman. His parents are killed in front of him and he vows to get revenge on all criminals who make people fear them. Bruce Wayne then disappears for a dozen years or more before coming back as the Batman. And we start when they are established and look in on their current story.

Year Ones ask the question, how easy was it for them to turn into the superhero we know? Where did Bruce go to learn to fight? How did he arrive back in the city? How did he earn the support of Commission Gordon? (Batman Begins pulled heavily from Batman Year One, if these questions sound like it answered them.)

This is no exception. The comic is written from Margo Lane’s standpoint, which serves to keep The Shadow shrouded a bit of mystery. The city is dealing with a masked figure gunning down criminals. It’s just the Shadow, though, not his usual group of agents, including Margo Lane herself.

I found this to be quite wonderful! I think that’s why I like trades now where they do tell an entire story, rather than getting individual issues. We see Lamont Cranston arriving back in New York, acting the playboy. We find out why he has come to NY and who he is fighting. We learn a bit about his powers and eventually who he is, which thrilled me! We also see him save Margo and then make her one of his agents. We see one of his early disguises at the police HQ when he needs to learn information on what the police know. And we see the start of his organization. By the end, it’s not done, but it’s a start. And the ideas of many of the Shadow stories before it are woven into it well, surprising even me a few times. I also liked the evolution that will happen between what he uses now and what his organization will use.

If I have any complaint, it’s two-fold. There is a lot of 30s slang that was tough to follow. It also took a bit to learn the characters because the art wasn’t as crisp or clean as I would have preferred to distinguish the many characters. I also think they needed a bit more foreshadowing of several things. However, still a great story and a solid four from me.

I'll get to it
View all posts by Percy Procrastinator »