A Fistful of Frost by Rebecca Chastain

In the few weeks, she’s been on the job, Madison Fox has faced imps, vervet, possessed hounds, cito, demons, and other dark creatures of Primordium. Now she must face her biggest challenge yet: a job performance review.

See below for information on a time-sensitive special deal and a giveaway from the author! 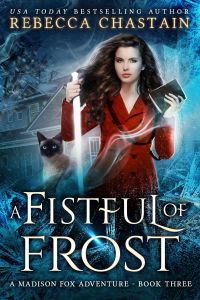 Madison Fox is determined to reform Jamie, her half-evil pooka, but the bond linking her to Jamie works both ways. Already, it has manipulated her into bending the rules. If she continues down this path, she could doom her soul. Since her judgment can’t be trusted, a high-ranking inspector now dictates Madison’s every interaction with Jamie, and each directive drives them further apart.

Unfortunately, Madison has bigger issues than the potential degradation of her soul. Winter has struck with a vengeance. Frost moths plague the entire state, reinforcing the artificially frigid temperature. Worse, cold-blooded, soul-stealing enemies are flocking into her region from the north—creatures Madison has little defense against.

With the inspector scrutinizing her every misstep, Madison is in for the battle of her life. If she hopes to survive, she must make an impossible choice: save herself and her region or save Jamie.

An imaginative urban fantasy filled with heart, humor, and plenty of butt-kicking action—A Fistful of Frost is a book you won’t want to miss!

Madison Fox had only been on the job for a couple of weeks before she bonded with a pooka and caused an upheaval in her region. Now, the Collaborative Illumination Alliance (CIA) wants to test her, fearing that her association with the pooka may have corrupted her soul. So Madison has to face an intense job evaluation while dealing with a close-lipped boss, inadequate on-the-job training, a self-aware and temperamental manual, a misbehaving pooka, resentful co-workers, and supernatural creatures she’s never encountered before. It’s enough to make anyone lose their mind!

Since she’s been thrust into the supernatural world—years later than any of her counterparts and lacking all the information she needs—Madison has been floundering through odd situations and uncovering plots and schemes just by being the outsider. She’s also been used as a pawn because of her ignorance and inexperience, and she’s gained the reputation of being unpredictable, hard to handle, and probably dangerous.

So In A Fistful of Frost, she’s trying very hard to follow the rules, take direction from people who have more experience, and do exactly as she’s told. But doing so drives a wedge between her and her pooka, Jamie, and makes the CIA and her co-workers even more suspicious of her motives.

Because of my own past job experiences, I identified almost too much with Madison’s frustrations about her job—poorly trained and with few resources, she’s trying to do her job while following all the rules and meeting all the expectations of people who may or may not even know what they’re talking about. It’s something everyone who’s ever had a job has experienced at one time and makes Madison’s situation very easy to relate to.

When Madison finally tells everyone to go to hell and does what she thinks is right, she goes from being a vulnerable novice to an empowered enforcer, which is what every frustrated employee wants. As a reader, I felt victorious along with Madison when she declared her independence from everyone else’s agendas. I think we’ll see a different Madison in future adventures; not a perfect one, but one operating under her own agency who casts a more skeptical eye toward other people’s rules.

I enjoy this series immensely, which is why the first two books earned a Standout Award from me in 2015. I’m thrilled we get to see a new chapter in Madison’s life and hope there will be another on the way soon. 5 stars.

Pre-order Giveaway: Order your copy of A Fistful of Frost between now and the release date on May 8, and you can receive a copy of the Madison Fox novelette, A Fistful of Flirtation.

Madison finally gets her date with Dr. Love—and if they had picked any other restaurant, she might have had a chance to enjoy it, too . . .

Series Giveaway: From May 8 to May 30, enter to win a $25 Amazon gift card or the complete Madison Fox trilogy! https://www.rebeccachastain.com/current-giveaways/