← Dark Lands: War of the Sentinels by Lyn Kelly
Lady in Waiting by Marie Tremayne →

What a Difference a Duke Makes by Lenora Bell

Historical Romance.  Governess and Duke.  Not a simple romance, but a life story from a fascinating woman meeting a abused and neglected duke.  It’s a story that I could not put down. 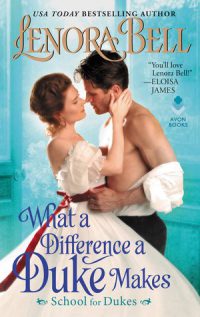 Edgar Rochester, Duke of Banksford, is one of the wealthiest, most powerful men in England, but when it comes to raising twins alone, he knows he needs help. The only problem is the children have chased away half the governesses in London. Until the clever, bold, and far-too-enticing Miss Mari Perkins arrives.

Lost: One heart to an arrogant duke

Mari knows how to wrap even the most rebellious children around her finger. But their demanding, wickedly handsome father? He won’t be quite so easy to control. And there’s something else she can’t seem to command. Her heart. The foolish thing beats so wildly every time the duke is near.

Found: A forbidden passion neither can deny

As his employee, Mari is strictly off-limits. But what if she’s the one breaking all his rules? In the game of governess versus duke, how can Edgar maintain his defenses when the only thing he wants to do is let the tempting beauty win?

I told you I’d break your bloody nose.  Now get in the carriage and leave, you craven piece of maggot droppings.

That’s a Duke defending a Lady, that’s what that is!! Awesome romance.  Plain and simple.  Two common folk that lead a not so uncommon life.  The Duke is a tradesman.  The Governess is an orphan.  Both are emotionally damaged, but then again, how can they not be when they were abused as children.  There is no cliffhanger and there is a very feel good and satisfying ending.  This is definitely a book to get lost in for a few hours. 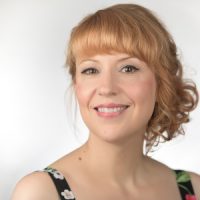 I actually met Lenora Bell.  I did! Scout’s honor and all that!  Let me tell you that she would totally fit in the era she loves to write.  SHE belongs on the cover of the books she writes as she is as pretty as any cover model, as kind as any of her heroines.  She’s also an amazing historical writer.

I bought her series The Disgraceful Dukes when I saw her in the Kansas City Kisscon.  Her next book in this School For Dukes series won’t be out until September 18, 2018, which will feature the sister of the hero Duke from this book.  Now, that’s going to be a blast because India is someone I would LOVE to have as a friend in real life.

Ok, about this book.  It was a great vacation to take on a beautiful spring/summer day sitting outside in my lawn chair.  Mari is a strong, independent 20 year old that has to make her way in the world alone.  She gets dumped on by the proprietor of the governess-for-hire service and gets her trunk stolen on the first day she’s in London.  Her life kicks into overdrive after that.  Chasing two youngsters who are feeling misplaced and unloved is quite a challenge, but Mari knows a thing or two about feeling misplaced and unloved.

Everyone needs someone to share the bad things as well as the good things.  Someone who knows the secrets and will keep them as well as defend them.  These two are perfect matches, but sometimes it takes the boldness of the woman to take the first steps.  Mari is the one that tugs the Duke along his path whether he wants to or not.  She is his hero and mine too.

← Dark Lands: War of the Sentinels by Lyn Kelly
Lady in Waiting by Marie Tremayne →