Once Burned by Jeaniene Frost

Vlad Tepesh blindsided.   How can that even happen?  Well, it happened.  Check out Once Burned, the first in the Night Prince series. 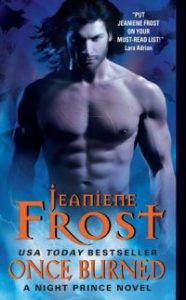 After a tragic accident scarred her body and destroyed her dreams, Leila never imagined that the worst was still to come: terrifying powers that let her channel electricity and learn a person’s darkest secrets through a single touch. Leila is doomed to a life of solitude…until creatures of the night kidnap her, forcing her to reach out with a telepathic distress call to the world’s most infamous vampire…

He’s the Prince of Night…

Vlad Tepesh inspired the greatest vampire legend of all—but whatever you do, don’t call him Dracula. Vlad’s ability to control fire makes him one of the most feared vampires in existence, but his enemies have found a new weapon against him—a beautiful mortal with powers to match his own. When Vlad and Leila meet, however, passion ignites between them, threatening to consume them both. It will take everything that they are to stop an enemy intent on bringing them down in flames.

His lips twisted. “No. I can give you honesty, monogamy, and more passion that you can stand, but not love. That emotion died in me long ago, as I suspect you already know.”

I read this book several years ago when I was hooked on Cat and Bones. I remember reading their first book around the 2008 time frame. When Frost released Vlad’s book I was all over it though I wasn’t confident I would like him much. He’s a warrior. He impaled thousands of prisoners which is barbaric. On the other hand, he has lived through war after war after war. Death is just another day at the office. Also, he’s born a prince and has been in charge for hundreds of years. After so much of bowing and scraping, I’m sure a person comes to expect it. The arrogance that is the key makeup of his personality is hard won after so many wins against death. I can’t fathom a 600 year old vampire with a record like that going after a 23 year old woman (yes, I know she’s 25 in this instance- it’s the principle of the thing) other than the novelty of being with the young and sexy. I can’t imagine they’d have much to talk about since she is so naïve so therein enters the sex. And she’s a virgin. That’s about as naïve as you can get. I know she isn’t portrayed as naïve because of all the death she’s seen through her gift, but I’m telling you, watching a thing and experiencing a thing is not the same. Now, I’m not bashing on Leila. She’s a character and a young one at that. She’s also silly in love and sometimes that can color

a view of the person she’s in love with. She does the best she can with what she has available. I also have to remember, this is the very first adult relationship she’s ever had. Ever. She has nothing to compare it to other than what she’s seen. Not experienced, just seen. Vlad isn’t in love, or so he says. However, he is a man and a tough character at that, so of course he wouldn’t show emotion.

The story is good. I know it’s a bit predictable, but I do like the characters. The story is told in the first person (Leila’s perspective) unless she is reading the essence of an item and then it’s the perspective of the person whose essence is attached to the item. There is quite a little blood (you know…vampires?) and gore (you know…The Impaler?) but not a lot of swearing. A lot of graphic sex scenes, but if it bothers, just skip over that part. There is a lot of scheming and long game playing which vampires are really good at playing. The ending is not a HEA. Remember, there are three more books in the hopper so there has to be drama.
I enjoyed the book and I was grateful that I had the next book to hop into because of the cliffhanger-ish ending. I like Frost’s writing and I will always read her books.