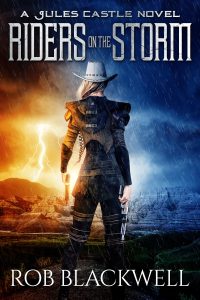 Jules Castle can outsmart, outgun, and outrun any bandit in the Old West. But will her legendary skills be enough to save her?
Three years ago, Jules’ outlaw father vanished during a mysterious mission. Since then, she’s kept up the family business, robbing banks and chasing clues to his whereabouts across the Territory. Unfortunately, his trail sets her right in the path of supernatural, hard-to-kill creatures known as Vipers, whose bite will transform anyone into one of their kind.
Jules is determined to save her father, no matter the peril or cost. With the help of a bounty hunter and her adopted sister Miranda, she will have to pull off an impossible rescue. Hounded by former members of her father’s gang, hunted by a U.S. Army posse, and pursued by Vipers, Jules’ chances are slim. Can she beat the odds one last time?

Author: Chanda Stafford
Series: Urban Magic #1
Release date: May 10, 2019
Description: She spent years avoiding the dead. Now they’re coming after her.
Three years ago, Max Norton left home to open a tea leaves and tarot shop. It seemed like a good trade: escape the King of Hell and live a low-key life free from scrutiny and death threats. For a Scythe, a half-human paranormal entity who can open literal portals to Heaven and Hell, and who’s hounded by creatures both light and dark, it’s a dream come true. Until an annoyingly handsome ghost shows up and demands that Max help him solve his murder.

She wants nothing to do with it, but when zombies start attacking children and demons are sent to kill her, she knows this is one fight she can no longer avoid. Her ex-boyfriend, a charismatic wolf shifter, tells her about a dead zone in the forest where a necromancer is practicing black magic.

The only way to stop him is with the forbidden powers she ran away from; powers that will put a target on her back, because they mark her for a destined role in Hell she has no intention of fulfilling.

Saving the world from the zombie apocalypse may literally mean challenging the armies of Hell and facing the past she ran away from. With time running out, Max and Luke have to figure out who’s raising the dead and turning them into bloodthirsty monsters before they kill the few people left that she actually cares about. Hiding in the shadows, a mysterious enemy holds a secret that could change Max’s life forever…

Assuming she lives long enough to hear it.