DC Universe and comic book fans will love this intergalactic story that features Red Hood, Arsenal, and Starfire as they venture across the universe to save it. 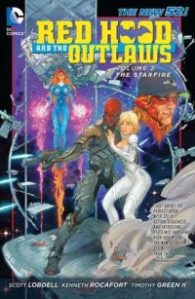 Publisher’s Description:  As if Batman’s former sidekick Jason Todd, now known as the Red Hood, didn’t have enough problems leading the team of outlaws such as Arsenal and Starfire, now his “estranged” brother Red Robin is knocking on his door because The Night of Owls is here! With Batman in dire need of help, will Red Hood answer the call?

And when Jason and the team find out that Starfire is one of the most feared (and dangerous) commanders in all of space, the team will find their adventures taken to the stars and beyond to help decide the fate of the throne of Tamaran. Witness the galactic struggle between Starfire and her sister Blackfire as Red Hood and the Outlaws are caught in the middle of an interstellar war!

DC Universe and comic book fans will love this intergalactic story that features Red Hood, Arsenal, and Starfire as they venture across the universe to save it.

I love that these comic books feature side stories from all the characters. In this installment, you’re able to get a glimpse of Kori (aka Starfire) and her origins. She’s an alien who was sold by her princess sister, Blackfire, to a group of slavers in hopes that they might make peace. Instead, she was abused and tortured through a lot of it. In the comics, she’s somewhat rescued by a rag tag team of alien prisoners and after everything she’s been through, she leaves that prison behind in the dust. Quite literally. But along the way she has discovered confidence, forgiveness, and power.

Arsenal and Red Hood are dealing with their own issues. Arsenal still has ghosts about the way things fell out between him and Green Arrow, while Red Hood fights to maintain peace in Gotham against the Night Owls. Is he a good guy? Is he a bad guy? Red Hood has always toed that anti-hero line, and now he’s got to figure out if stepping in to help his former friend, Red Robin (Tim Drake) and mentor (Batman) or if letting the Night Owls take out the criminals is what Gotham needs.

As much as I was a fan of the story, it jumped around a lot and Starfire’s story was the hardest to understand. Certain frames were harder for me to follow in a lot of scenes, so I had to go back and reread a ton.

Plus, I LOVED the artwork of the first book so much that I was really sad that it changed so drastically in this one. Starfire always looks great. She’s beautiful and powerful and dangerous and that artwork really comes through for her. But Jason and Arsenal don’t get justice I feel like. Jason just magically has a spacesuit that he carries with him at all times??? I know that he’s a very prepared guy, but I think even that takes it too extreme.

Anyway, this is a great book. Eager for the next one since this leaves you hanging at the end.

I'm an urban fantasy and young-adult paranormal writer. I love to cook, rock out to music, and read as much as I can get my hands on. Always believe in your dreams and pursue them no matter what the cost. If you believe in it, it's worth every chance you take.
View all posts by Kat Mandu »

Posted on July 23, 2019, in All Reviews, Kat's Reviews and tagged graphic novel, Kat Mandu. Bookmark the permalink. Leave a comment.