Title: Boundary Haunted
Author: Melissa F. Olson
Series:  Boundary Magic #5
Release date: December 3, 2019
Description: Months after her battles in Wyoming, Allison “Lex” Luther is still struggling with the aftereffects of the psychic attack she suffered—and with the new developments in her own magic.

Then Lex’s boss, the cardinal vampire of Colorado, passes along a strange request from her counterpart in Atlanta. Hundreds of Civil War spirits have abruptly vanished in Beau Calhoun’s territory, and he wants Lex to figure out why. In exchange, Beau can help her understand boundary magic, which runs in his family line as well.

Despite her trepidation, Lex journeys to the Deep South, where she discovers that ghosts are everywhere…and that her host’s intentions are more complicated than he promised. It seems his teenage descendant is being hunted, and both Beau and Lex fear the young woman’s boundary blood may have made her a target.

With Atlanta’s history looming over her every move, Lex will have to face Beau’s ghosts—and her own—to prevent a boundary magic attack she never dreamed possible. 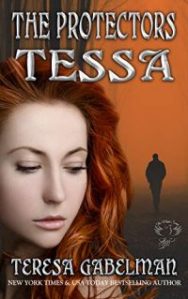 Author: Teresa Gabelman
Series: The Mate Series
Release date: September 9, 2019
Description: Tessa Pride, mate to VC Warrior Jared Kincaid, is doing everything in her power to become a respected Warrior in her own right. Unfortunately, her mate isn’t quite as excited about her passion. Tessa walks into the role with a newfound sense of determination knowing her decisions could end her relationship with the man she loves.

With everything to lose, Tessa steps into the battle of earning the right to walk next to her mate in life, love, and work. Though she is also ready to walk alone if necessary, she will make sure Jared Kincaid regrets that for the rest of his life.

The Mate series delves into the kickass world of the Warriors’ mates and how united, they can make a difference—just like their badass Protectors. Follow along to see how these exceptional women’s newfound freedom affect those around them and which Warrior may or may not support their feisty independent mate’s new and exciting path.

This series was recommended to me by none other than Ruby Lee.  I gotta hand it to her, it looks really good to me. Besides, LOOK AT THAT COVER!!  I haven’t tried it yet, but I’ve got the books in my cart and will click the button any minute.

Title:  Dark Beginnings
Author: Michael Robertson, Jr.
Series: Lance Brody series
Release date: November 10, 2016
Description: From his birth, Lance’s life has been different. With visits from lingering spirits, telepathic whispers, and an uncanny ability to solve the unexplainable, Lance has spent the first twenty-two years of his life in his small hometown, wishing only to be normal. His mother is his most trusted confidant, and together they’ve survived as Lance comes to grips with his gifts, his burdens, and the unsettling knowledge of the darkness that lives among us.

But now, there’s a new evil in town. A darkly powerful duo who’ve arrived and know exactly what Lance is. And they want him for their own.

As Lance’s world is quickly turned upside down and tragedy unfolds, he suddenly learns his purpose may be much larger, and much more dangerous, than he could have ever imagined.

BOOKS IN THE LANCE BRODY SERIES:

Posted on August 18, 2019, in Book Hunt. Bookmark the permalink. Leave a comment.