As the Tarot incarnation of Justice, tracking down the outlaws of the psychic community and delivering them to Judgment is Sara Wilde’s business…and business is good.

Now a rival syndicate known as The Shadow Court seeks to impose their own brand of justice, restricting magic to only the richest and most influential psychics, while stripping power from all the “undesirables” along the way. Their top priority? Hit Sara Wilde, guiding light of psychics everywhere, where it hurts…

Right in the heart.

From the crackling fires of Burning Man to Sara’s even more incendiary high school reunion, the path is never more twisted than when you follow The Wayward Star. 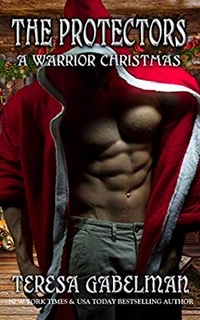 To have more Christmas fun dive into A Warrior Christmas to see which mate gets the perfect gift and which Warrior Grinch finds his holiday cheer.

Jess Vandermire and John (Britt) Brittain have been in Paris for three months now, but they aren’t going home yet. There’s a complicated vampire uprising brewing, and everything they’ve encountered in Paris so far has drawn them deeper into the conspiracy. It’s becoming apparent

there are more than just vampires in the mix, but Jess still hasn’t figured out exactly what they’re up against…or who their true enemy is.

Jess and Britt will have to work without a net, covering treacherous terrain to root out just what the threat is. The police are no longer trustworthy–even though someone is definitely doing everything in their power to break the current Pact between vampires and humans. But when Jess and Britt finally unearth the truth, they realize that they’re facing their most dangerous enemy yet.