Shadows in Death by J.D. Robb

Lt. Eve Dallas is about to walk into the shadows of her husband’s dangerous past. 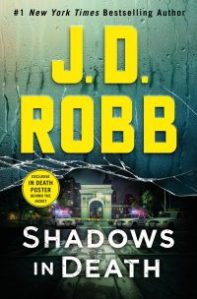 Publisher’s Description:  Lt. Eve Dallas is about to walk into the shadows of her husband’s dangerous past.

As it often did since he’d married a cop, murder interrupted more pleasant activities. Then again, Roarke supposed, the woman lying in a pool of her own blood a few steps inside the arch in Washington Square Park had a heftier complaint.

When a night out at the theatre is interrupted by the murder of a young woman in Washington Square Park, it seems like an ordinary case for Detective Eve Dallas and her team. But when Roarke spots a shadow from his past in the crowd, Eve realizes that this case is far from business as usual.

Eve has two complex cases on her hands – the shocking murder of this wealthy young mother and tracking down the shadow before he can strike again, this time much closer to home. Eve is well used to being the hunter, but how will she cope when the tables are turned? As Eve and the team follow leads to Roarke’s hometown in Ireland, the race is on to stop the shadow making his next move . . .

All I can say about Lorkin Cobb is “What an effing idiot.”  He thinks he’s gonna take Roarke down?  Kill Dallas?  Dude, you got some delusions of grandeur.  Obviously, he has no idea who he’s messing with.

This was a story that did have a bit more gooey stuff between Roarke and Dallas (before the ultimate end) and it felt a little over the top.    Other than that, it was golden.  The initial case was a quick solver and I was gratified at how Eve got the defendant to cry.  The arrogant nasty sociopathic jerk cried.  That case didn’t exactly end right with that arrest.  I got to go with the team on a fast paced, no holds barred manhunt of the bought and paid for assassin.  I got to learn more about Roarke’s background.  I got a good look at how Sommerset fathers Roarke (which was really awesome) and how cool it is to watch a team work together.  Everyone.  All of Eve’s people wanted in on catching this moron.  They, every last one of them, are frosty to the ult.  And the ending?!?  It was a spectacular chase.  I loved every minute of it.  I can tell you I always get satisfaction at the end of these books.  Eve and Delia do their “in the box” work and nail the sleazy, evil monster to the wall.  It’s such a feeling to see the good guys win.  This ending was no slouch either.  It may be the best dramatic endings so far.  No, no cliffhanger, just an awesome “nail that bastard” ending.  I also loved, to the point of “nanner, nanner” NYPSD’s success in locating Cobb when InterPol hadn’t been able to in 20 years.  It was marvelous.

My favorite alternate character in this book was the shopkeeper at the men’s store that Cobb shopped at.  He was an absolute treasure.  He was so excited to be a part of a police investigation that I just had to smile.  I loved him.  Watch for him when you read/listen to this book.

As always, these books get a 5 star.

Our reviews in this series in no particular order…