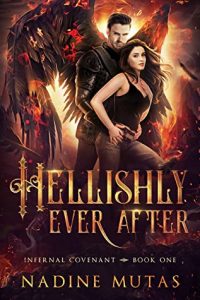 Title:  Hellishly Ever After
Author:  Nadine Mutas
Series: Infernal Covenant #1
Release date:  December 24, 2020
Description:  Ever held a seance and accidentally trapped a demon into marriage? No takers? Just me? Crap.
Marriage is my idea of hell, at least until the day an unfairly hot demon shows up in my apartment and drags me to actual Hell—as his wife. I’d honestly rather have a root canal without sedation than marry anyone, least of all a surly—even if damnably attractive—demon, but I’m bound to the contract stupid teenage Me made with Azazel when I accidentally summoned and trapped him into marriage, to be consummated if I were still single at twenty-five.
I’d forgotten all about it.
He hasn’t.
And now he’s here to claim me.
Neither of us is thrilled about this marriage-of-inconvenience, but what I hate even more than the idea of being married…is being ignored. So when Azazel intends to simply park me out of sight and mind at the other end of his estate in Hell, I make it my newly eternal life’s mission to be as much of a real inconvenience for him as possible.
It’s all fun and games, until I find a soul that shouldn’t be in Hell, stumble smack-dab into the middle of a demon family feud…and the banter between me and Azazel turns so hot it might consume me. 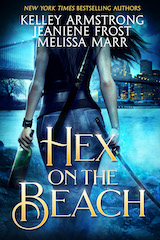 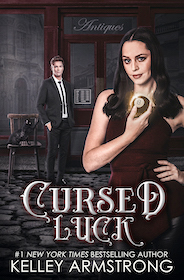 Title:  Cursed Luck
Author:  Kelley Armstrong
Series:  Cursed Luck #1.5
Release date:  March 27, 2020
Description: Kennedy Bennett comes from a long line of curse weavers. For centuries, her family has plied their trade in Unstable, Massachusetts, a quirky small town that’s welcomed paranormal practitioners since the dawn of spiritualism. Kennedy has recently struck out on her own, opening an antiques shop in Boston, where her speciality is uncursing and reselling hexed objects.

Then Aiden Connolly walks into her life with an offer she really should refuse. The scion of a wealthy family of luck workers, Aiden has a scheme to get his hands on the most famous cursed object of all: the mythical Necklace of Harmonia. He’s not the only one after the necklace, though. And he’s not the only one looking for a curse weaver to fix it. Kennedy’s sisters are kidnapped, she finds herself plunged into the underbelly of the magical world where even Aidan soon finds himself in over his head.

Let’s start the year with comedy.  Faith Hunter and several contemporaries have put this book together that takes place in the land of Jane Yellowrock.  Anything Jane Yellowrock is golden, so I’m pretty hyped about this new release.

Title: Dirty Deeds
Author: Faith Hunter, Diana Pharaoh Francis ,Devon Monk , and R.J. Blain
Release date: January 12, 2021
Description: Venture into a thrilling spinoff tale from the world of Jane Yellowrock, join vacationing gods in what appears to be a quiet, ordinary town, visit a supernatural hotel where the bedbugs could very well eat you, and dive into the zany, deadly world of the Magical Romantic Comedy (with a body count) series. 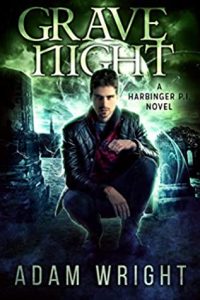 Title:  Grave Night
Author:  Adam Wright
Series:  Harbinger P.I. #10
Release date:  January 26, 2021
Description: If you can keep your cool when everyone else is losing theirs…maybe you don’t realize how bad the situation is

Rekhmire the Destroyer wants to annihilate the world (that’s what destroyers do) and he isn’t going to stop until he’s achieved his stretch goal of making everyone a part of his undead army.

Not on my watch. It’s time to send this walking piece of leather back to the tomb he crawled out of. But how am I supposed to do that when he’s immune to all magic and weapons?

I think I need something different.  I’ve been having trouble getting into any stories lately, so I figure I might be in a rut.  I found this new to me author and series that looks good, so I thought I’d share.

Two years ago, as a former National Security agent, Alex nearly died in an explosion during a covert operation. Now, working in the private sector, she’s been assigned to track down hostages in a place to where she’d promised herself she’d never return: Afghanistan.

Thirsty for revenge against the deadly regime that has caused trauma-ridden flashbacks, Alex vows to eliminate the source of her nightmares once and for all.

But on her first day back in the field she has a collision with a blue-eyed, US Navy SEAL that kick starts her heart, adding more drama to the already dangerous situation. Though she’s surrounded by friends and colleagues who care about her and have sworn to protect her, Alex fears someone within the ranks lacks trust and loyalty.

US Navy SEAL, Lt. Commander, Marcus “Ace” Chambers knew from the moment he first saw Alex Hardesty that she was special. But this is no ordinary woman. While she is beautiful and intelligent; she has a target on her back, making her the most wanted woman in Afghanistan.

With danger lurking behind every corner can Ace and Alex balance the romance building between them while preventing further harm to themselves and their team before it’s too late? 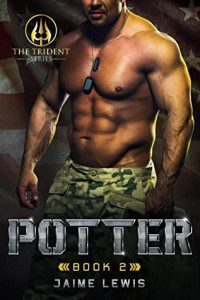 Title:  Potter
Author:  Jaime Lewis
Series:  Trident #2
Release date:  August 25, 2020
Description: Tenley Cortez finally had everything going for her; a job that she enjoyed, her friends and family, and a man who treated her with love and respect. But when her toxic ex-boyfriend shows back up and decides he wants to rekindle their relationship to further his shady business dealings things get a little dicey, not to mention dangerous. His violent and cruel heart forces her to distance herself not only from the man she loves but her friends and family as well. She desperately wants to tell her story, but fear holds her silent. With her broken heart and constant fear, she throws herself into her work by traveling to Ecuador on a humanitarian aid trip. She was not expecting someone to be waiting there for her to further complicate her life.

All that Rex “Potter” Richardson wanted to do was a live simple life alone outside of his career as a Navy SEAL. That was until a few months ago when the gorgeous and outgoing Tenley Cortez walked into his life and stole his heart. After a sudden and unexplained breakup, Potter is left with questions. The sudden distance Tenley puts between herself and her friends and family further adds to the mystery. When Potter and the team are called out for a mission to South America, he learns a shocking revelation about Tenley that threatens to unravel everything.

Together, can Potter and Tenley pick their way through the webs of deceit, blackmail, and violence to get their happily ever after? 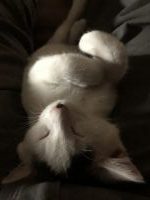 Update on the Schatzi:  Still a crazy little cat.  It’s hard to believe the first pictures of this poor sickly little critter is really the same cat as the one that is running roughshod over my house.  I mean, seriously?  Why does every thing that I set down HAVE to be knocked off on the floor?  How come does all my food require an attempt at taste testing?  And snuggles?  Oh, hell, no.  Ain’t got time for that!!  Needless to say, I enjoy him immensely.

Do you remember the Virgin River stories?  No? Well, let me remind you…

I read the whole series except for the last one, because…you know…you read the last one and then it’s truly over.  Yes, yes, I know.  That’s a neurotic way of looking at it, but that’s how my ‘hamster on a wheel, circus in my head’ works.  Anyway, Robin Carr, author of the Virgin River series is releasing another addition to the Virgin River series.  I love long lasting series because they feel like family.  Everyone cares, which in this day in age is hard to come by.  This new book will be released next month and I was hoping to re-read all the prior books, but that might be an aspiration that meets with the hard truth of reality.  Meaning, it isn’t gonna happen – at least not by next month.  Anyway, here’s the new release scheduled for drop on October 13, 2020. 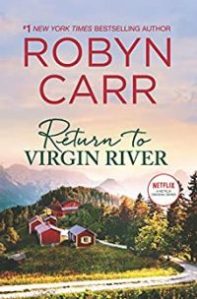 Title:  Return to Virgin River
Author: Robin Carr
Series:  Virgin River #19
Release date:  October 13, 2020
Description: Kaylee Sloan’s home in Southern California is full of wonderful memories of the woman who raised her. But the memories are prolonging her grief over her mother’s recent death. A successful author, Kaylee hoped she could pour herself into her work. Instead she has terrible writer’s block and a looming deadline.

Determined to escape distractions and avoid the holiday season, Kaylee borrows a cabin in Virgin River. She knows the isolation will help her writing, and as she drives north through the mountains and the majestic redwoods, she immediately feels inspired. Until she arrives at a building that has just gone up in flames. Devastated, she heads to Jack’s Bar to plan her next steps. The local watering hole is the heart of the town, and once she crosses the threshold, she’s surprised to be embraced by people who are more than willing to help a friend–or a stranger–in need.

Kaylee’s world is expanding in ways she never dreamed possible. And when she rescues a kitten followed by a dog with a litter of puppies, she finds her heart opening up to the animals who need her. And then there’s the dog trainer who knows exactly how to help her. As the holidays approach, Kaylee’s dread turns to wonder. Because there’s no better place to spend Christmas than Virgin River.