Abandoned in Death by J.D. Robb

Homicide detective Eve Dallas must untangle a twisted family history while a hostage’s life hangs in the balance. 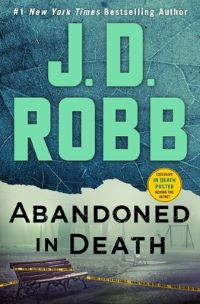 The woman’s body was found on a bench in a New York City playground. She was clean, her hair neatly arranged, her makeup carefully applied. But other things were very wrong—like the tattoo and piercings, clearly new. The clothes, decades out of date. The fatal wound hidden beneath a ribbon around her neck. And the note: Bad Mommy, written in crayon as if by a child.

It seems clear the killer’s childhood was traumatic—a situation Eve is all too familiar with herself. Yet the clues point to a perpetrator who’d be around sixty, and there are no records of old crimes with a similar MO. What was the trigger that apparently reopened such an old wound and sent someone over the edge? When Eve learns that other young women have recently vanished, the case grows even more urgent—and to solve it she’ll need to find her way into a hidden place of dim light and concrete, into the distant past, and into the depths of a shattered mind.

You know I love me a good story with Eve and Roarke.  I waited and waited for this book because…well…you know, Eve and Roarke.  This story starts out a bit differently than some of the other books with the spotlight on the killer as a child.  A creepy little brat of a kid.  The mom is at the end of her rope and that’s where the mom and kid’s lives take a turn.

I saw the core group in the story plus Mavis, Bella, Leonardo, Nadine and special appearances by Quilla, Morris and Jamie.  I enjoyed spending time with them but I have to tell you that I wasn’t all that glued to my seat.  I could really see the “bones” of the book as I read.  Eve getting called on to investigate, rattling Dickhead’s cage, Roarke working e-man, Roarke giving the same look when Eve asks if he could find out something, Roarke picking the locks, the gratuitous sex scene and then the breakdown in the box with people watching in observation.  I’m not saying that it was a bad story – it was ok but it lacked the usual edge of my seat anticipation.  I’ll read it again, maybe I’ll change my mind.

One Book Two on Social Media via:

Posted in All Reviews, Nell's Reviews