Have Stakes, Will Travel. Faith Hunter is best ambush hunter. Jane has more than her hands full this time around. 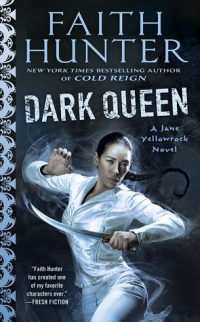 As Enforcer to the vampire Master of the City of New Orleans, Jane Yellowrock stakes her reputation and her life on keeping her territory safe. But Leo has been issued a blood challenge by the emperor of the European vampires, who seeks to usurp all of his power and possessions. If Leo loses the match to the death, the city will be forfeit, and the people of New Orleans will suffer the consequences. Jane can’t let that happen.

Preparing for the duel requires all of Jane’s focus, but with so much supernatural power in play, nothing goes according to plan. She has to rely on herself and the very few people she knows she can trust to stand and fight. Only two things are guaranteed: nothing is sacred, and no one is safe.

Nervous Nellie’s nervousness necessitates knowledge of the novel. In some cases…spoilers. *BEWARE*

Vamps and weres and their blasted layers of conspiracies within plots within intrigues within treacheries.

I love Jane Yellowrock. I love the whole of Clan Yellowrock. Every last one of them. Not Leo, though. Well, maybe Leo a

little bit.  There is no graphic sex and very little cussing since Jane doesn’t allow it.  There is plenty of blood and death because without that, there would be no vampires.  There is a satisfying ending, though it’s not the end of the series.  I have to tell you, without a lie, I cried.  The sad lasted only a blink, so don’t let that stop anyone from reading.  If you are wondering about the comment above regarding Faith Hunter is best ambush hunter, that only means that I was taken by surprise

I can tell that the series is starting it’s wind down but that does not mean there are not some spectacular action scenes and conspiracies not yet explored. Jane is again in a tight spot.  So tight it’s accurate to say Rock meet hardspot. She has to think quickly because this is truly “IT”.  If Leo dies, then the EV Titus gets control and it will not be an easy death.  Leo is kind compared to this…this…this…butthead.

The story is not mired down by descriptions and fluff that is not necessary. It’s face paced, blow your socks off incredible. Jane didn’t laugh much in this story. The vampire duel is very serious stuff. She had a lot of work to do besides the duel though. Multitasking is obviously Jane’s forte. She has a strange man showing up to blind side her with news. Ricky Bo is

around and that relationship just got far more complicated. (It pleases me that he is feeling a lot of remorse for leaving Jane.) The Younger brothers are stellar as always with Alex growing into a responsible adult more and more. Bruiser is beautiful – ‘nough said. Without spoiling anything, I can simply say this book had revelations and changes to everyone’s lives.  I was blindsided more than once.  Also, I swear to you, Jane makes the long game vampires play seemingly easy to figure out. She is one brilliant War Woman.

Today will be all about Jane Yellowrock.  I don’t know what I will do when the series is done.  I imagine I’ll just read it again…and anything else that comes from Jane’s author.  I love Faith Hunter’s writing.  I love the characters that she develops and the story is like an action adventure movie!

Before you read all the way to the bottom, I want to put this out there:  Ms. Hunter released a short story in the Jane Yellowrock world and you can find it here.

The story is Jane trying to get Wrassler and Jodi together for a date.  Bruiser, Jane, Eli and Syl went along to complete the “triple date”.  You’d think this would be simple.  Yeahhhh…..right.

Now, I’m sure ya’ll want to know why I have the cover of Dark Queen posted. Well, crew, I was lucky enough to get permission from Ms. Hunter to post the first chapter in Dark Queen, #12 in the Jane Yellowrock series.  Remember, this book is released on May 1, 2018.  The European vamps are coming for the big assemblage and you KNOW that if Jane can’t make it through a date (see above story) without something going wrong, you know that this confab will not be simple…nope, not simple at all since the fate of all rest on Jane’s shoulders.

Sit back, relax and be enthralled with the first chapter in Dark Queen, Jane Yellowrock series #12, written and produced by Faith Hunter.

*I Killed the Only U’tlun’ta in NOLA*

I had been in my bed for all of one hour, and though the scent of Bruiser from the sheets and from his boxing gloves tied to my bedpost usually filled my head with calm, today his personal aromatherapy wasn’t working. I had rolled over half a dozen times trying to find a comfortable spot. Now the covers were twisted around me, my hair was tangled in a knotted mess, trapping me, and I was ready to explode. I resorted to punching my pillows in growing irritation, not that it helped. “I should give up and find something else to punch. Someone else to punch,” I muttered, thinking of Leo Pellissier, the Master of the City of New Orleans.

My attitude was so bad that my Beast retreated into the deeps of my mind to get away, her paws padding in a jog. “Coward,” I snarled at her. Being two-souled wasn’t easy for either of us.

A soft knock sounded at the front door. Tap, tap, tap, tap. Tap, tap, tap, tap. The first tap in each repetition more forceful than the others, but barely loud enough to hear through the closed bedroom door. Maybe a preacher. Or a steak salesman. Beast stopped and looked back at me. Excitement zinged through her. Man who sells meat? Cow at door?

I chuckled internally. Could be, I thought back at her. Or a proselytizing vacuum cleaner salesman. Did vac salesmen even exist now?

Is vacuum good to eat? Or salesman? Both? she added hopefully.

The knocking came again, a bit louder. Tap, tap, tap, tap. Tap, tap, tap, tap. It was a rhythm that Aggie One Feather, my Cherokee Elder, might have drummed. My partner and soon-to-be adopted brother Eli hadn’t answered the door, and I could hear shower water upstairs. I grinned and I was pretty sure I was showing teeth. Lots of teeth. I wondered if they were all mine, but I didn’t really care. I was sleep deprived and ornery and if this was some vamp’s minions calling to cause trouble about the arrangements for the upcoming Sangre Duello, that might actually make my day. I could use a good fight. A blood challenge to the death between Leo and the European emperor and all their pals would surely provide that, but until then, I had the knocking visitor.

I threw off the covers and twisted my long black hair back in a knot. In the black yoga pants and black T-shirt, I looked like a ticked-off ninja. I picked up a fourteen-inch-long vamp-killer I kept on the nightstand and tore open the bedroom door. The knob slammed into the wall behind as I reached the foyer. Eli stopped on the stairs behind me, shower-wet, a weapon at his side. My partner in protect mode. I shared my grin at him and his brows lifted, an infinitesimal gesture that meant loads for the former (and forever) Army Ranger. I didn’t bother to try to figure out loads of what. I peeked out the front, through the tiny slice of clear glass in the layers of bullet-resistant and stained glass window.

On the other side of the door stood a man, facing the street. He was tall, lean, maybe six feet three. Straight black hair hung long, down his back to his hips. Golden skin showed at his clean-shaven jaw, which looked tight with frustration. He was wearing black slacks and black blazer jacket. A white dress shirt collar showed from this angle and he was wearing polished leather cap-toe oxford shoes, what my boss, the Master of the City and walking, talking fashion plate, called a Balmoral. Imported shoes.

It griped my goat that I knew all that. Just another useless thing I had learned hanging around vamps. Another way they had changed me and my life. My irritation flamed.