Before Lyra started her adventures, her coming was foretold. See how it really started in La Belle Sauvage by Phillip Pullman, a new book in the same world as His Dark Materials. 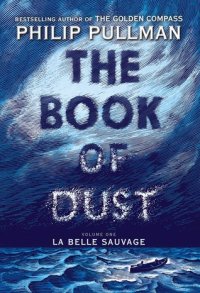 Publisher’s Description: Malcolm Polstead is the kind of boy who notices everything but is not much noticed himself. And so perhaps it was inevitable that he would become a spy…

Malcolm’s parents run an inn called the Trout, on the banks of the river Thames, and all of Oxford passes through its doors. Malcolm and his daemon, Asta, routinely overhear news and gossip, and the occasional scandal, but during a winter of unceasing rain, Malcolm catches wind of something new: intrigue.

He finds a secret message inquiring about a dangerous substance called Dust—and the spy it was intended for finds him.

When she asks Malcolm to keep his eyes open, he sees suspicious characters everywhere: the explorer Lord Asriel, clearly on the run; enforcement agents from the Magisterium; a gyptian named Coram with warnings just for Malcolm; and a beautiful woman with an evil monkey for a daemon. All are asking about the same thing: a girl—just a baby—named Lyra.

Lyra is the kind of person who draws people in like magnets. And Malcolm will brave any danger, and make shocking sacrifices, to bring her safely through the storm.

5 stars isn’t enough praise for this book. Having loved the original trilogy, His Dark Materials, I thoroughly enjoyed reading about Lyra’s early life. So much so, that I went from this book right back to the original trilogy. Pullman did a fantastic job of creating a much larger role for very minor characters in the original. This also felt much more like a straight adventure tale rather than a moral tale with an adventure.

The flight from the nunnery that Malcolm and “the kitchen girl” make is absolutely heart pounding. I literally was up until the wee hours reading to make sure they were OK. However, the tension lasts until practically the last page, so it was hard to know when to put it down and take a breath. The evil character and his daemon, the disabled hyena, that pursues the young people and baby Lyra are villains straight from your worst nightmares. The one thing that kept me from despair was knowing that Lyra makes it to Oxford and is taken in.

I highly recommend the whole body of work from Philip Pullman’s His Dark Materials!

Posted in All Reviews, Annie's Reviews