Fused in Fire by K.F. Breene

Some things are worth fighting for, and freedom is one of them. Reagan is Lucifer’s daughter, and she needs to hide from those who want to use her to their advantage. But how can she do that while meeting them on their own turf?

Publisher’s Description: I thought the threat from Seattle was finished. That we showed up in time and took care of business.

I hate being wrong. It really ruins my day.

When Roger, the alpha of the North American pack, shows up at my door with the news that a demon has made it to the Underworld with knowledge of me, some hard decisions have to be made.

Do I stay above ground, with all my magical friends, and wait for the battle to come to me? Or do I seek the demon out, and pluck the threat out by the root?

I don’t want my friends to die on my behalf. I could never live with myself. But if I venture into the Underworld, it’ll be the most perilous journey of my life.

This time, it isn’t just my life hanging in the balance, it is my eternity.

Nervous Nellie’s nervousness necessitates knowledge of the novel. In other words… Spoilers. *BEWARE*

“Just FYI, in case you need a barometer reading on the day’s suckery, it is high. Very high. There is a shitstorm warning in effect.”

This story does have a small mention of sex, but nothing graphic. Reagan is very independent, and she tends to swear a lot. There are parts where demons and other evil creatures meet the business end of Reagan’s sword. This is the conclusion of the trilogy, and it would be smart to read books 1 and 2 prior to this book. Also, there is a satisfying ending, and maybe Reagan and Darius could be brought back for more adventures, but it’s the end for now.

First off, I love Reagan. She is so brassy and snarky that she makes me grin every time she throws out a one-liner. Even when she is surrounded by bad guys, she has something to say that is not necessarily something someone would say when that someone’s life is being threatened. She has bravado, but why shouldn’t she since she’s the daughter of Lucifer. She’s got two powers fighting for dominance: one ice, one fire. She has to try to learn how to wield them or there will be serious trouble.

Darius is a wealthy, elder vampire who does not want a woman in his life. He needs Reagan as leverage, and she is useful with her power. His sire, Vlad, also wants to succeed in his quest to be most powerful, but he’s got a different path. As the trilogy moves along, Darius starts feeling emotional about Reagan. She makes him feel his humanity again. Darius wants Regan for his own and needs to convince her that he’s trustworthy and has her best interest in mind. It’s a feeling that many older vampires want back as they age and lose everything that they were when they were alive.

This story is action-packed, full of great movie quotes, and the daughter of the devil. Reagan has to stop the information that she exists before it reaches her father. She and Darius travel through hell, and Reagan even sees her father from a distance. It’s a fantastic adventure, and Reagan is one kick-ass bounty hunter with powers to boot. Also, if you love great showdowns, the end of this book is one that was worth the price of admission.

Our reviews from in the series…

Posted in All Reviews, Nell's Reviews

Raised in Fire by K.F. Breene

Got a steady job.  Got a housekeeper, a fallen angel for a dad, an understanding boss, and even a righteous sword.  Who needs more?  Reagen Sommerset, that’s who.  Less talk and a lot more action is what she’s all about.

Publisher’s Description: It is a common truth in my life that when it rains, it pours.

The killings that once plagued New Orleans are cropping up again in Seattle. The local office is stumped. I’m called out to lend a fresh set of eyes, and my unique magical touch.

It’s only when I get there that I realize the Seattle office isn’t stumped at all.

They’re being silenced by the Mages’ Guild, a corrupt magical institution that doesn’t want word to get out of what is plaguing the city. Worse, news of my magic might’ve slipped down to the underworld, hitting the ears of some extremely powerful demons.

What I thought was a routine murder investigation turns into a fight for my life. With the help of Darius, my stalker elder vampire, and my dual-mage side kicks, I somehow have to dodge the Guild in order to stop one of the most powerful demons I’ve ever encountered. If I don’t? It’ll escape back down below with proof of what I really am.

My life hangs in the balance, and this time, I can’t see a way out.

This book rocked! This is #2 in the 3 book run of Fire and Ice series.  There is swearing.  There is death.  There are

monsters.  There is tricks and conspiracies.  All those things, but mostly just the last 4 will give you a hint there are vampires as well.  There isn’t a cliffhanger, but a lead in to the next book.  There is some graphic stuff but not horror graphic.

I can’t say enough good about this series so far except I will be sad when I get through the last book.  Reagan is someone I’d like to hang with and see what trouble she land in next.  Her dad is Lucifer.  She’s supposed to reign in hell.  She doesn’t want to.  She’s great at the bounty hunter job she has in the brink and she doesn’t want to be noticed by the demons bent on bringing her into her daddy’s inner circle.  Well, they could also use her to their own ends too.  I mean, they are demons, you know.

And then there is the vampire stalker.  Oh, he doesn’t think he’s a stalker.  For some reason, even unknown to the elder vampire himself, he is pulled to Reagan like a magnet.  Darius doesn’t like the feelings she’s stirring up in him.  He’s a vampire for goodness sake.  He’s not supposed to have feelings, but Reagan is pulling him back to his humanity.  It’s really a fun journey.  Reagan and Darius work so well together, it would be a shame to split them.

This story is exactly as the description claims and it was an adventure full of discovery and death.

Born in Fire by K.F. Breene

Working with vampires is never a good idea, but when broke, ya gotta do what ya gotta do. 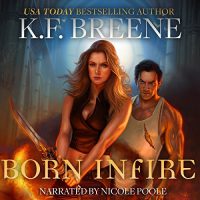 Publisher’s Description: Supernatural Bounty Hunter isn’t the sort of thing you see on LinkedIn. But with a rare type of magic like mine, I don’t have many options.

Dangerous or not, the job is mine. And it was going fine, until an old as sin vampire stole my mark, and with it, my pay day. Knowing I’m poor and desperate, he has offered me a job. I’ll have to work by his side to help solve a top secret case. Everyone knows not to trust vampires. Especially a hot elder vampire. But without any other jobs coming up, I’m stuck. As I uncover a web of lies and treachery, revealing an enemy I didn’t know existed, the truth of my identity is threatened. I might make it out alive, only to end up in a gilded cage.

This was a fun an engrossing book. There is no sex-alluding to the deed, yes.  Following through, no.  There is one spot of nudity,

plenty of killing of witches and mages…and zombies but no graphic description of violence that leans into the horror category. The four letter “f” word was used a little bit, but it had to be done to make the character a dimensional and believable character. There was also no cliffhanger.

Can I just say that I was not expecting this kind of story? I was kind of expecting a heroine that’s clingy and wishy washy attitude that amplifies to the damsel in distress when she falls into a vapid romance with a vampire that’s going to save her.  That’s what I could get when I do no research, read no sample chapters and listen to no snippets from the narrator.  Basically, I put my money down blindly.  That’s totally unusual for me. But I did it anyway.  Me.  Taking a chance.  Write it in the history books.

What I got in this book, were characters that practically walked out of my earbuds to sit in the room with me.  I gotta say, Reagan’s contacts, clients, co-workers and neighbors are incredibly interesting folk.

When I grow up, I want to be just like Reagan Sommerset.  She’s not afraid of anything.  She’s confident, knows exactly what to do and can figure out a smart ass comeback in a blink of an eye.  She’s such a stand out character that I loved her every minute. Even in the most difficult and awkward of situations, she always has something sassy to say.

As I said, the writing was great – but the narrator….the narrator NAILED it. Her voice range was amazing. This book did not sound like it was being read-no, it sounded like it was being lived!  Poole’s inflection on frustrated, tired, sassy, bossy, hardass Reagan was golden.  Then came the other characters that stood out.  I could picture Reagan’s neighbors and the mage duo like I’d known them forever.  I don’t know how Nicole Poole does it, but she can go from one character speech to another totally different character with a different accent and timbre at the drop of a hat.  I was so impressed with this book, I had no other choice but to give it 5 stars.  It was that good.