A Stitch In Time by Kelley Armstrong

Thorne Manor has always been haunted…and it has always haunted Bronwyn Dale. 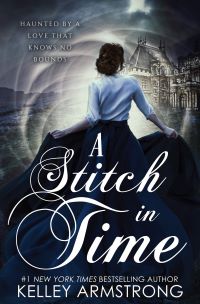 Publisher’s Description:   Thorne Manor has always been haunted…and it has always haunted Bronwyn Dale. As a young girl, Bronwyn could pass through a time slip in her great-aunt’s house, where she visited William Thorne, a boy her own age, born two centuries earlier. After a family tragedy, the house was shuttered and Bronwyn was convinced that William existed only in her imagination.

William Thorne is no longer the boy she remembers. He’s a difficult and tempestuous man, his own life marred by tragedy and a scandal that had him retreating to self-imposed exile in his beloved moors. He’s also none too pleased with Bronwyn for abandoning him all those years ago.

As their friendship rekindles and sparks into something more, Bronwyn must also deal with ghosts in the present version of the house. Soon she realizes they are linked to William and the secret scandal that drove him back to Thorne Manor. To build a future, Bronwyn must confront the past.

If you read some reviews of this book, you will find either the reader liked it or couldn’t finish it.  I liked it.  Was it the best I’ve ever read?  Nah, not really.  First of all, I’m not a fan of time travel.  I find it hard to wrap my brain around.  In this book, the characters struggle with the concept of changing the future by being in the past.  One team thinks it will make a change to the future and the other team thinks that the universe will adapt and adjust.  Well, isn’t that the same thing?  I would like to have a conversation with someone who understands better than I do, that’s for sure.

So, Bronwyn inherits an old manor house with ghosts.  WARNING:  Don’t read on unless you want to know some spoilers.  She needs to find peace with these ghosts in order for them to move on.  The problem with that is that these people had been killed (all except one and he was there with unfinished business) and Bronwyn has been tasked with helping find their murderer.  The mystery part was what really engaged me – probably because that’s the genre I really like.  The romance part was very sweet.  William is complicated.  He’s very much an introvert (which we can relate to) but he is and always will be, in love with Bronwyn.  William is angry because Bronwyn left him at age 15 and never came back.  He’s carried this anger for 23 years and really plays hard to get.  Of course he gives in.  Bronwyn (I love that name) has always loved Thorne manor, but she has a bad experience associated with it that she has to come to terms in order to move on.  That, in a nutshell, is the book.

I have problems with the story.  Bronwyn can bring her cell phone and a picnic basket to William’s side, but not a kitten.  Bronwyn has a month old kitten that acts more like an 8 week old kitten and the kitten saves her life.  Oh, sure – that’ll happen.  I’ve never met a cat that would care if I was alive or dead unless that lack of life messed with it’s mealtime and believe me, I’ve had A LOT of cats.  So, the fact of the matter is, if you can suspend your disbelief, you’ll probably enjoy this book.  I did suspend my disbelief until I wrote this review, and I will say I liked the book.  The mystery was a good one – lots of twists and I didn’t know who did it until the end.  I give the story a 3.5.

Posted on August 24, 2022, in All Reviews, Nell's Reviews and tagged A Stitch in Time, Kelley Armstrong, Nervous Nell, review. Bookmark the permalink. Leave a comment.